“Thank You Mayor Menino” signs will be available Monday morning at 10:30AM at the following locations:

A Celebration of the Mass of the Resurrection for Mayor Thomas M. Menino 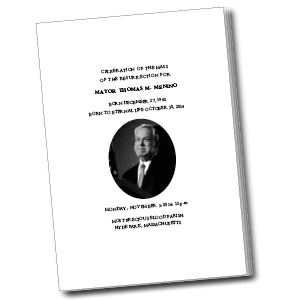 The complete formal program will be made available prior to the ceremony.

As he lies in state on Sunday, Mayor Menino will be accompanied by an honor guard of former staff members. Shifts have been grouped thematically and include those representing causes of particular importance to Mayor Menino, community leaders, and others who worked tirelessly for him behind the scenes.

Symbolically, the overnight shift will be comprised of members of Mayor Menino’s Office of Neighborhood Services (ONS). While others were finished working for the day, Mayor Menino’s ONS staff responded to fires in the middle of the night, delivered toys to children through the holiday season, and attended to the nitty gritty of neighborhood life that was so important to the Mayor.

The honor guard will be with Mayor Menino until he departs Faneuil Hall on Monday morning. A full schedule is below.

These lots will be reserved for invited guests only. Guests are highly encouraged to carpool, as parking is limited.

Lot reserved for family members only:
Hyde Park Municipal Lot
Entrance is across from the Hyde Park Library, which is located at 35 Harvard Ave., Hyde Park
Approximately 135 spaces

To accommodate services for former Boston Mayor Thomas M. Menino taking place on Sunday, November 2, and Monday, November 3, the following temporary parking restrictions will be implemented in the City of Boston.

Tow Zone: No Stopping Monday 12:01AM to 3PM
Streets adjacent to the church will be closed, as well as Central Ave. which is adjacent to the Hyde Park Community Center. Other temporary closures of minor streets may be made to support the activities related to the funeral.

Tow Zone: No Stopping Monday 12:01AM to 3PM Media Only

Additional updates and alerts from the City may be posted at CityofBoston.gov.